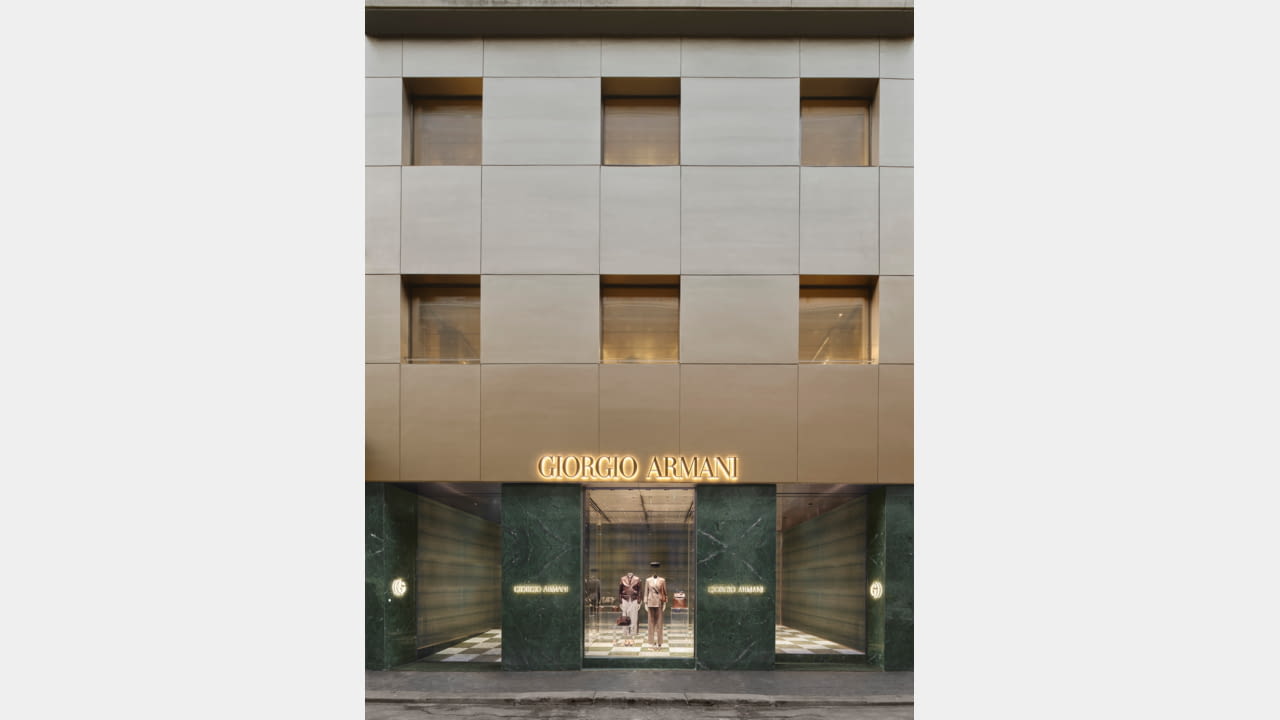 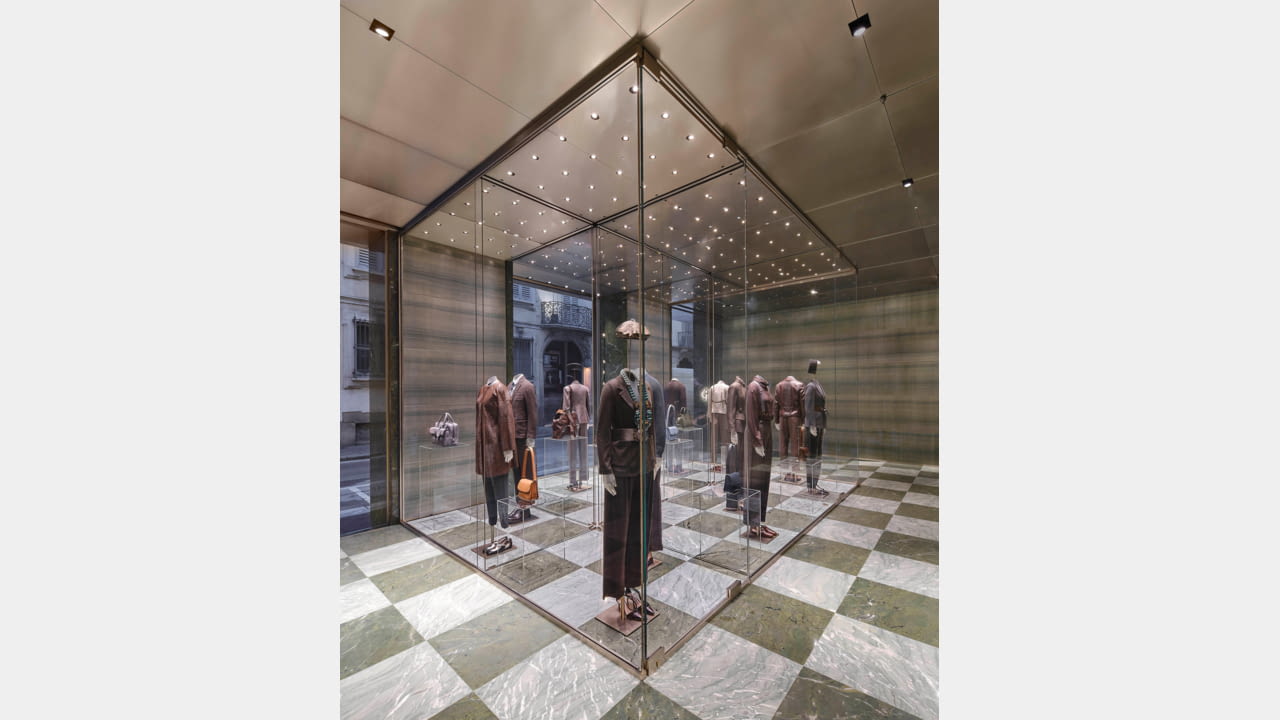 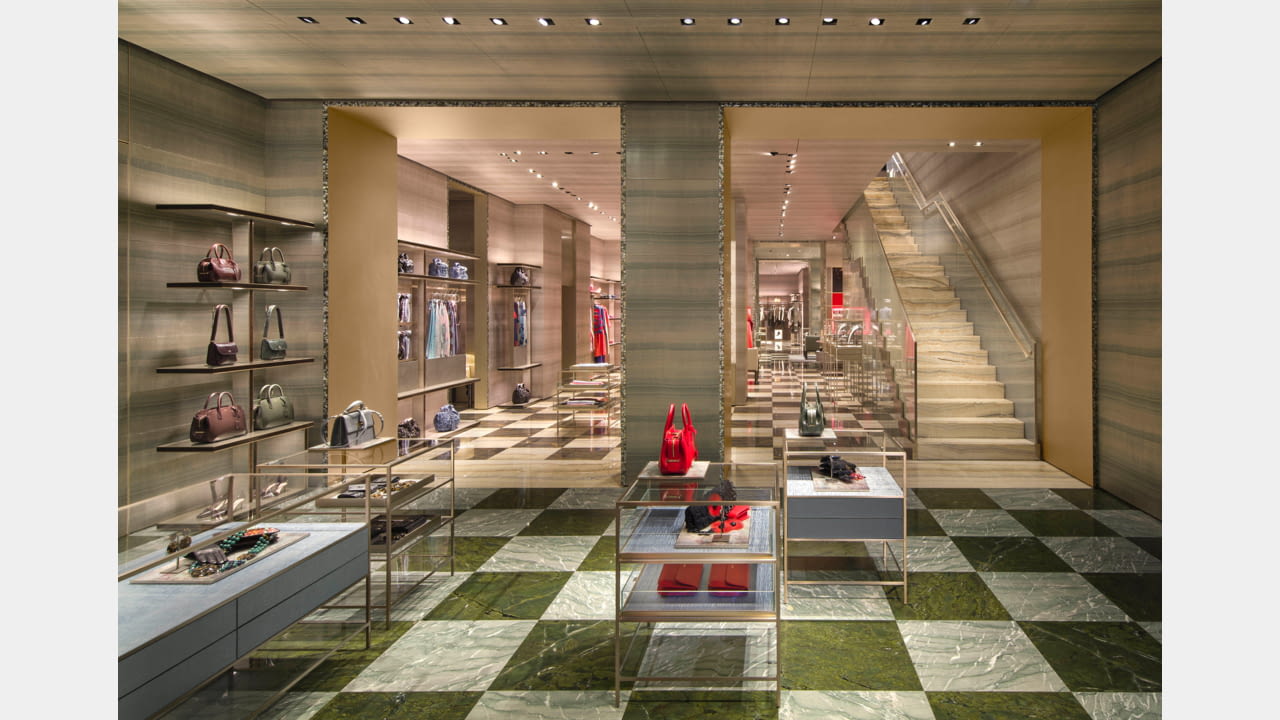 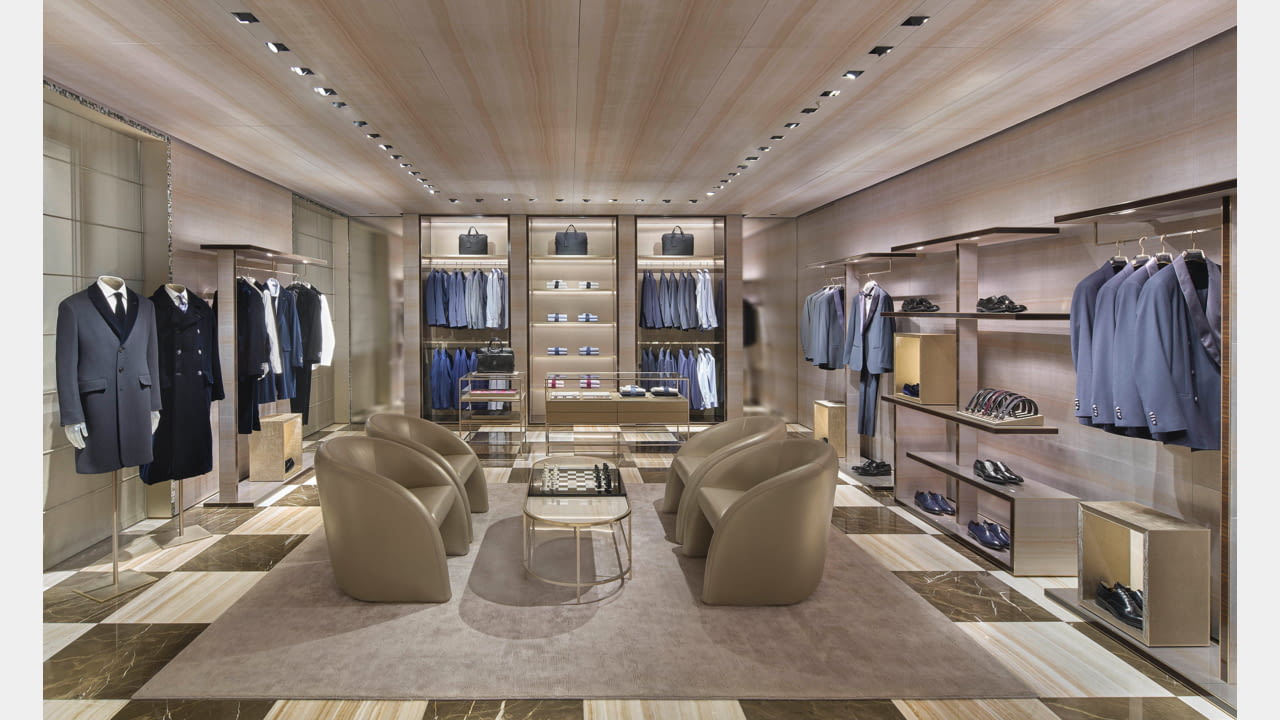 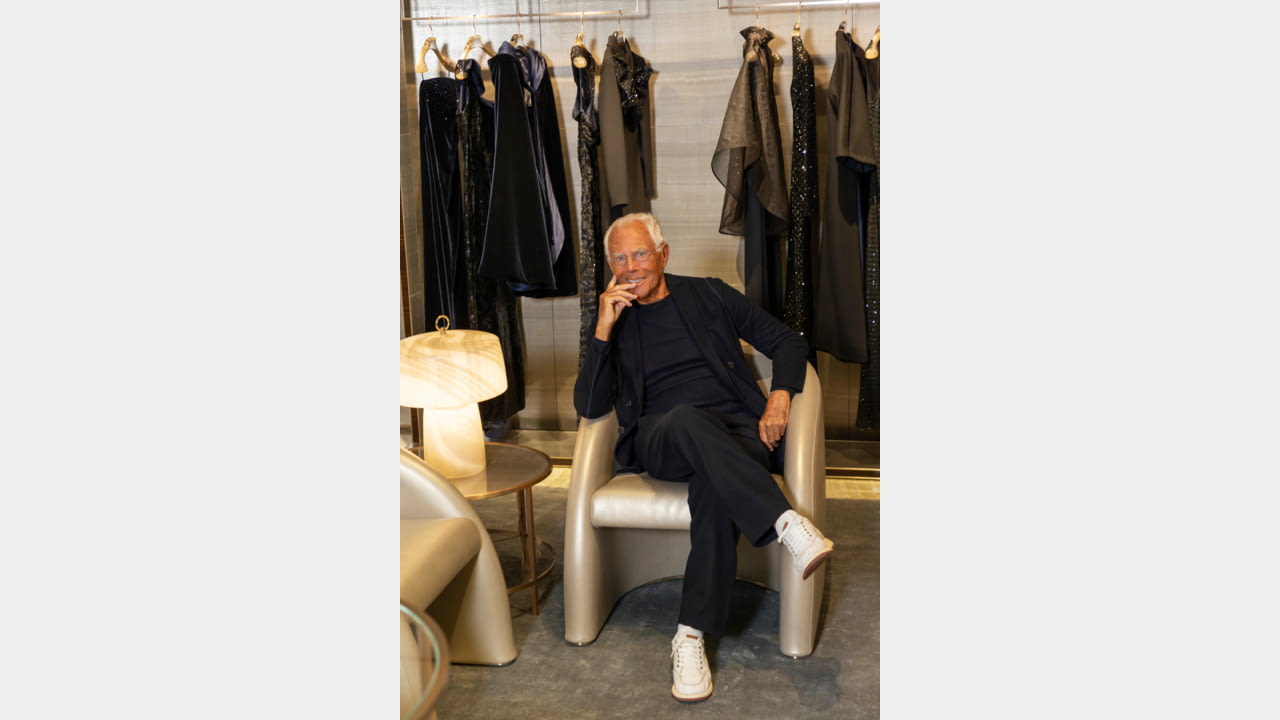 Via Sant’Andrea, in the so-called “fashion quadrilateral” of Milan, where luxury and international style come together, was Giorgio Armani’s choice in 1983 for his first boutique in the city. For many years, this quiet street, with that typically Milanese elegance of ancient palazzos and hidden courtyards, was the site of the Giorgio Armani boutique; and from 2010 to 2017 it also housed the Armani/Casa range. Today, this is the location to which the designer has now returned with a unique concept, paying homage to timeless design, something that is immediately apparent from the outside of the new boutique. As a well-proportioned break in the classical order of the street, the façade attracts attention with its restyled base in a special green granite and with the platinum- coloured finish of the upper levels.

Giorgio Armani says: ‘In the elegant setting of Via Sant’Andrea, with its line of fine historical palazzos and modern store windows, the past is interwoven with the present. This is where I’m now returning, to the former Milanese location of the first Giorgio Armani boutique in the city, with a different offer, and without any feeling of nostalgia. This is demonstrated in the new concept for the boutique. I wanted the epitome of my vision of timeless beauty to interact here with the contemporary dimension. I want to offer my customers a comprehensive space that allows them to experience the Giorgio Armani world to the full, from accessories to prêt-à-porter, and from my emphasis on craftsmanship to personalised services and the focus on attention to the needs of the customer.’

The boutique, covering four floors, has a total area of 1,200 square metres – double that of the original store – and has unusual architectural features that make it unique. There are two side passages via which the internal portico is accessed. This functions as both entrance and window, and is large enough to be divided into six themed areas. The glazed space on the first floor showcases the special collections: with see-through walls screened by thin gold-tone mesh and surrounded by bamboo – referencing Giorgio Armani’s love of the East and its landscapes – it appears as a sort of winter garden. Equally surprising, at basement level, is the salon for presentations, with its 78 seats surrounded by the softness of the veining of Velluto Onyx and walls in silk in matching colour. Special too is the lighting arrangement created by the way natural light coming from the large windows is always subtly filtered and softened by thin mesh in gold-tone metal.


The luxury flooring in this large boutique, with its chequer pattern in polychromous onyx and marble, is coordinated with the silk wall coverings and the ceiling, which echo the colours and veining of the various different areas within the boutique. The rooms running along the space are connected by platinum-coloured doorways with mother-of-pearl trim. Dark edges in eucalyptus wood, a design feature typical of the ‘30s and ‘40s, define the shapes of the elegantly linear perimeter furnishings. The interior is punctuated by tables in resin with a fabric effect and platinum- coloured metal, coordinated with the surrounding colour scheme. Small tables in pear wood and mother-of-pearl, inlaid by hand by Italian artisans, bring an added touch of sophistication and luxury.

At ground level the store holds the women’s clothing and accessories collections and the Armani beauty area, which features a make-up station, while the first floor is given over to the men’s collection with the new idea of a double display unit for formal outfits. A world of imagination and perfection echoes throughout the second floor among the eveningwear, the Made to Order and Made to Measure services. A table and two small armchairs are placed in front of six showcases holding the Giorgio Armani high jewellery creations, a restricted area for those who wish to spend time with the most exclusive and exquisite expression of luxury. Four French windows bring a sense of openness to the space, looking out onto the skylight of the glazed area below and the gift section with its display of Armani/Casa precious objects. From this floor, which looks out onto Via Sant’Andrea, the fine Baroque frieze of the 16th-century Palazzo Morando, which is opposite, can be admired.

Video walls are installed at each level, in addition to the four interactive ones in the entrance area, to show images of the season’s collections and create an impression of dynamic movement. The various floors are accessed via straight staircases, clad throughout in Velluto Onyx with gold metal details, in whose distinct and regular profile a visual feature typical of the Giorgio Armani design idiom can be recognised.

This special boutique, conceived to cross the barriers of time, is the latest example of how the world of architecture and design can express the Armani philosophy – one capable of transforming beauty into something both welcoming and comfortable. With his taste for luxurious understatement, an inimitable and distinctive trait, Giorgio Armani has redesigned this place to provide a unique, full and totally engaging experience involving all the senses. 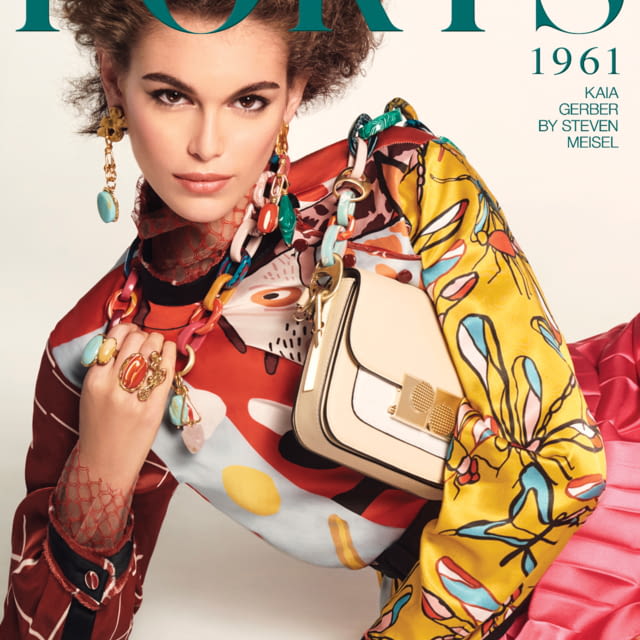 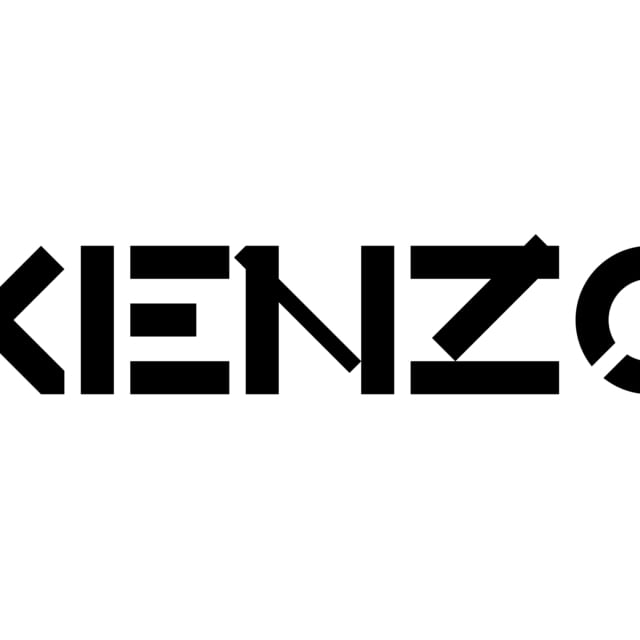